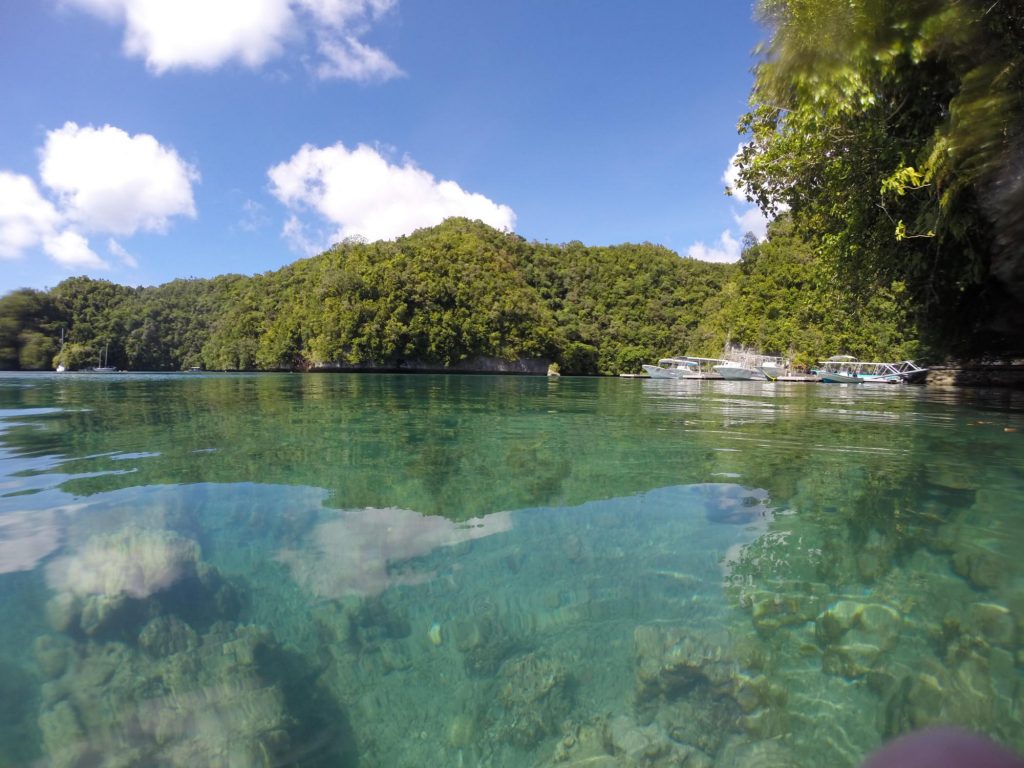 We inaugurated the continent of Oceania with this wonderful and so remote destination.

After arriving at the hotel around 2am, we immediately went to sleep. Hotel DW is a simple hotel but with excellent value for money for Palau. For the price we paid for this small and simple room we could stay in a 5 star hotel in Las Vegas! Anyway, we slept very well and also woke up very early in order to look for a last minute deal and thus save a lot of money. From what we understand, this whole South Pacific paradise is quite expensive, probably due to the North American influence in this continent after WWII, where the dollar is king and lord as well as all its counterparts, taxes and “tips”. It is something that I deeply dislike, for sure that these islands could have cost at the level of Southeast Asia if the Americans had not won the war in the Pacific.

After having an American breakfast with toasts, eggs and coffee at an exorbitant price for Portugal and a sloppy and unfriendly service, typical for these parts as we have come to see and above all very different from the usefulness to which the Japanese have accustomed us. , we set out to discover diving centers.

Our initial goal was a “live aboard” (stay on an all-inclusive boat) as we had in the Galapagos but nothing done… here it was necessary to book in advance and with prices between 2500-3500€ each for 1 week. Really crazy! We stopped at a discreet dive center in front of a Korean cafe and they had an interesting hotel and diving package but we decided to go looking for more. In the meantime they spoke to us at a dive center near the bridge that connected Koror to Malakal and it seemed very unprofessional and was much more expensive than the Korean one.

Along the way we started to see Palau for the first time, as we had arrived at night and the first image is not stunning, it is a mixture of concrete and American and Japanese cars in the middle of poorly maintained houses, but with a typical appearance for the region. . It has a touch of American with Polynesian, surrounded by the famous islands connected by concrete bridges but with paradisiacal and transparent waters. Along the way, we even spotted a still juvenile eagle-ray and got excited for the difficult journey in the blistering heat under the Palau sun. In the meantime they showed us the way to Sam’s, a famous local dive center that we had seen on the internet and with excellent reviews so we decided to try our luck. When we got there, we found an incredible level of service and the person who attended us undoubtedly managed to convince us to dive with them. The main problem was Filipa’s fear of sharks but she managed to say the right phrases so that, despite the fear still present, she could consider doing a week of diving.

Palau is an authentic paradise but without beaches here on the main island, so Palau is all about diving. There’s practically nothing else to do here. To go to the rare beaches and diving spots we always have to take speed boats. The prices of the snorkeling or kayak tours were exorbitant (around 130USD each!!)

After choosing the hotel, West Plaza Malakal (much better than the hotel the night before), we decided to try the water next to Sam’s and thus try out the diving equipment and above all the fears still present in Filipa. The feeling of entering the water completely revitalized us. What hot water! It doesn’t even refresh, it’s an authentic hot water broth. This feeling is valid for everything and for the thousands of kilometers we traveled to reach the Far East.

Tomorrow it’s Filipa’s day to face her first dive and there’s no way to avoid the sharks, it’s the way we look at them that needs to change. They are just another animal in this ecosystem and nothing more than that. We have to respect them all without exception 🙂

No data was found