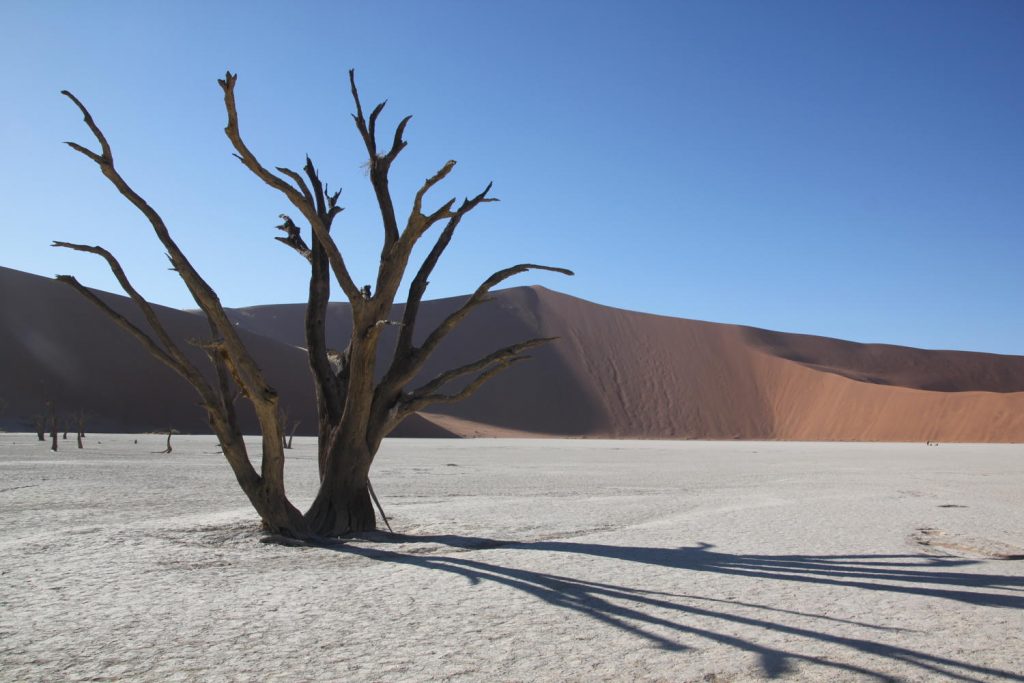 A terra The enchanted land of southern Africa. The mysticism for those who roam the dunes of the Sossusvlei desert, those who meditate under the dead trees of the Deadvlei, those who drive on the Skeleton Coast, those who photograph an elephant drinking water, those who listen to the tribal chants of the JoHoansi and those who witness the magnificent sunset African.

Under the scorching sun, just sand. Out of sight. The blue sky embraces the dunes that gather the Deadvlei. There, on the ground scarred by the dryness of the heat that makes the skin crackle, we are. Sitting on the sand. I feel the dry, hard ground in my fingers. It has long gone from being light sand to being a layer of compacted earth full of ruts. I stretch my legs and let my head fall back. The shade of the tree beside me protects me from the sun’s rays. Its shadow seems to bring tranquility. I see Diogo at the top of the dune. It will start to run down it. I prepare to film the showy fall I know he will most likely take. In the distance I hear him shouting war cries and cheering as he runs down the dune. The dune is so big that its sounds reach my ears late.

Unbelievably does not fall. He comes downstairs with a grin from ear to ear. I look at him, he looks like a child. “Have you seen me? Have you seen me?” I smile at him with my hand covering my eyes so that he can better see his silhouette against the sun. He lies down beside me and takes a deep breath of content. We see few people traveling the crest of the dune with any difficulty. That’s what happens when you climb in the sand… we take three steps forward and two steps back. The path is slow and painful, but the view from above… this is priceless. We have to stop many times along the way to remove the sand that accumulates inside our sneakers and to drink water and rest. We take the opportunity to take photos, make videos and clown around. We sat on the sand so many times, wanting to give up the battle against the sand.

A few minutes later, we got up from that parched ground to hit the road. We take the usual photos and hit the road. On the way to Skeleton Coast, we made our stops at Walvis Bay, Swakopmund, Hentiesbaai to Cape Cross. Here there is a colony of fur seals. Some slumber, others complain about the proximity of neighbors, others of hunger. Some swim and surf the waves in the bay, others snore in the shade. Some are nice, others not so. There are sea lions of all sizes, some alive and some dead, with the carcass already dry, only the skin remains.

We enter the Skeleton Coast, signing an entry document, and make the road alone. All day, alone. We don’t see anyone on the road. We see a coyote here and there. Nothing more. The sky is slightly overcast, but a few hours later, closer to lunchtime, it starts to open. The white dunes reflect the sun, linking us. We think it’s a good idea to leave the main road and take a secondary road, still on asphalt, that takes us to the beach. We want to go to lunch there, by the sea, with that white robe, the sky and us. Suddenly, the car just stops. I open the window. It’s mired in sand. Turnips! We don’t know how to use the jeep’s gearbox. We got out of the car and started to remove the sand around the tires. We try to get the car out, but it just gets into the sand more and more. Now the tires are completely in the sand and it is already at the doors. Despair sets in, with panic giving signs of itself. We evaluated the possibilities, questioned possible problems, prepared for the worst, and decided to walk to the main road. We estimate about 5km to the main road. It is now 2 pm, we have 1 hour to go there (where no one has spent the whole morning) and the sun sets at 6 pm. We got there at 3pm and at 4pm at the latest we have to go back to make sure we get to the car, to stay overnight, before nightfall. We have an interval of 1 hour to pass someone on the road.

With us we take protein cereal bars, a headscarf that protects us from the scorching sun, the two cell phones, which do not pick up a network nor are they a sign of life to call the emergency, and a shovel. Yes, a shovel. We didn’t know what dangers we were running on foot around there and that’s why we intended to go minimally protected. We made our way to the road at a short pace. We knew we didn’t have a lot of time and also that our chances of seeing another car were slim. It was almost running that we did the 5km. The only living thing we saw was a butterfly that was walking around. When we got to the road, we were exhausted.

We rest our tails on a rock and try to catch our breath. Suddenly, we see a jeep in the distance coming towards us. We didn’t even want to believe our luck… We jumped off the rock, started waving our arms in the air and asking loudly for them to stop. It was probably our united chance of getting help that day. The jeep passes us without slowing down and as they pass us, we both shout “HELP!”. The jeep stops at the bottom and stops a few meters ahead. Diogo puts down his shovel and goes to the car to explain what had happened. Very kindly, they gave us a lift to the next village (23km away), where we only found one man in the middle of some abandoned shacks. It was the ranger there, but he was alone, he didn’t have a phone or a car. He couldn’t help us.

We continued on to the next village (48km away) and managed to find 3 men to come with us. We said goodbye to our rescuers (taking pictures of us with the men and the jeep that would give us a ride, to be registered in case something happened to us) and continued on our way. On the way, between conversations about football, religion and our countries, the driver asks us where our car is. We explained that we had entered a secondary road and that the car had been stuck 5km from the main road. And he asks “Did you walk 5km?” “Yes! It didn’t cost that much…” “Weren’t you afraid of the lions?” “What???!!!” He says that in that area there are two lionesses patrolling the area looking for food and judging by the amount of animals we saw, food is scarce. A snack like us should have tasted good to them. We didn’t even want to believe…

When we reached the cut where we had driven the car, it was in an instant that we reached the car. Next door was a coyote sniffing everything, possibly looking for the food we had in the car. They helped us take the car out of the sand and it was 5 minutes before the car was ready to go. The sun was almost touching the horizon and we knew that until nightfall we had to be out of the national park. Missed task for sure! It would take us about 1 hour to get there and night would fall in less than 30 minutes. It’s about dispatching and accelerating. We said goodbye with the payment of aid and with nods and a “see you soon” “we hope not!” Laughter.

When we arrived at our safe haven, the night was already long. Everything was closed and there was no soul to be seen. We call, we whistle, we try to open the gate. We managed to get in there, out of fear that we wouldn’t be badly received because we were invading the property. A person appears who welcomes us. We spent the night startled by the wind and strange sounds.

The next day we left for a few days in Etosha, to do the long-awaited safari in Namibia. We saw elephants, giraffes, gazelles, wildebeests, countless birds… the landscape is beautiful and hides several species. The common mortal will know that it is in the water points that we can see animals. So that’s where we stopped. Animals appeared from all sides to drink water. Always on the alert, nervous and frightened, they warn each other of possible dangers and the species hardly ever mix.

But the high point of this trip was yet to happen. When we left Etosha, we turned the wheels towards Botswana. We wanted to go almost to the border, to Tsumkwe. It was this place that had made us change our destination and opt for Namibia. Here hid the Jo’Hoansi tribe, a tribe whose language is as strange as it is peculiar. They speak with strange sounds, with clicks of their tongues and live on what nature gives them. They hunt and harvest seeds and produce their own natural food and medicines. We share unique moments, we listen to their stories, translated by the only person in the tribe who spoke English. We were alone with them. Just the two of us and these lovely people, genuine and so different from us but who at certain times were exactly the same. They laugh at the same things, want the same as us, and yearn for the same.

No data was found